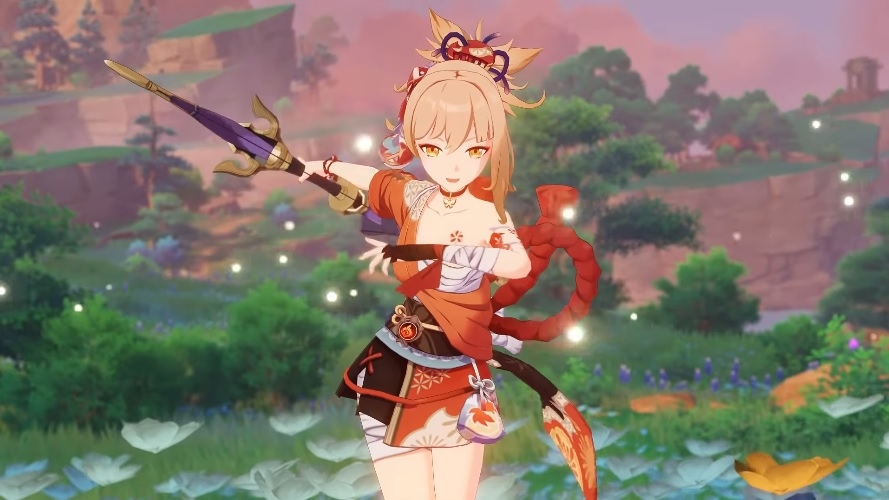 Yoimiya has been one of the most anticipated playable characters to join “Genshin Impact” since she appeared in the leaks. Luckily, do not have to wait that long for her arrival. miHoYo has revealed the exact release date and time for the Yoimiya banner, along with the official character demo.

Yoimiya's addition to “Genshin Impact” will be a little different than other character banners. The five-star Pyro, along with other characters launching this week, will not be available through the usual Wanderlust Invocation. That means the only way to get them is by participating in the Event Wish tailored specifically for their arrival.

The launch of the Yoimiya character banner will be the highlight of the in-game event fittingly titled “Tapestry of Golden Flames.” It will kick off on Tuesday, Aug. 10, at 18:00 server time, which translates to 3 p.m. ET / 6 p.m. ET. In the same event, “Genshin Impact” players will also get the chance to receive a “huge drop-rate boost” for four-star characters Sayu, Diona, and Xinyan.

Aside from the Yoimiya character demo, her abilities have also been revealed ahead of her launch in “Genshin Impact.” For one, her Normal Attack is called Firework Flare-Up, which allows Yoimiya to perform up to five consecutive shots with her bow.

Meanwhile, miHoYo confirmed that Sayu, a character also launching on Tuesday, will be available through the standard Wanderlust Invocation event. But players will have to wait for it until “Genshin Impact” version 2.1 goes live.

The “Tapestry of Golden Flames” event will run through the end of the month. In the same period, miHoYo is also putting up a Trial Run that will let “Genshin Impact” players use the said characters in fixed lineups.

Players who have unlocked the Wish system are eligible to join the trials, and they will be rewarded for every trial stage completed. Bonuses include 20 Primogems and 3 Naku Weed for the Yoimiya stage, 6 Adventure Experience points and 3 Calla Lily for the Diona stage, 3 Mystic Enhancement Ore, and 3 Violet grass for the Xinyan stage, and 15,000 Mora and 3 Crystal Marrow for the Sayu stage. “Genshin Impact” is available on PC, Android, iOS, PS4, and PS5.