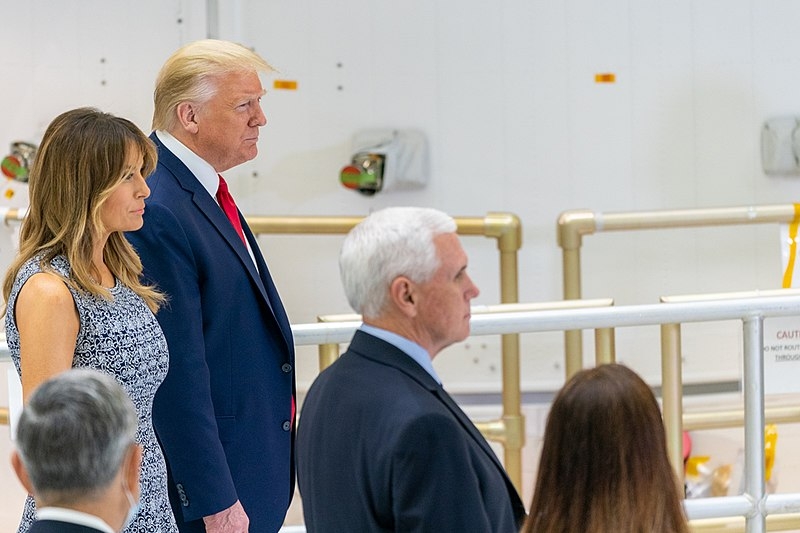 Before Melania Trump was known as the first lady, she was a former fashion model. According to the book centered on Mrs. Trump, she reportedly passes on some modeling tips to her husband Donald Trump.

Business Insider reports that the new book, The Art of Her Deal: The Untold Story of Melania Trump by Washington Post reporter Mary Jordan, details that the first lady gives her husband tips on how to appear slimmer in photos. In the book, Melania supposedly stage-manages his appearance, using her experience as a model to make him appear more defined in front of cameras.

An excerpt published by The Daily Beast reveals that before a photo shoot, Melania would be heard telling Donald to “slightly lift and extend his chin” and that he could “tighten and define his facial muscles by placing his tongue on the roof of his mouth.” In another excerpt that was published separately, Melania has also supposedly told her husband to stand further back in group photos to look slimmer.

The first lady has also reportedly had studio lights installed in the room in the White House where many of the official photos are taken. Melania’s stage-management of her husband also extends to official functions, one instance of which was in 2018, during the state dinner in which French President Emmanuel Macron and his wife Brigitte Macron, she was overheard managing his movements.

Aside from using her modeling experience to make her husband appear slimmer in photos and in functions, other published excerpts also reveal a little bit about her relationship with her stepdaughter Ivanka Trump. Aside from the power struggle that the two seemed to engage in during the early days of the Trump presidency, there was also the nicknames they called each other.

Melania referred to Ivanka as “The Princess” while Ivanka called her stepmother “The Portrait” because she hardly spoke.

This unauthorized biography was based on 100 interviews with people who were close to the first lady, many of which were done off the record. However, White House spokesman Judd Deere said that the claims presented in the book were completely false.