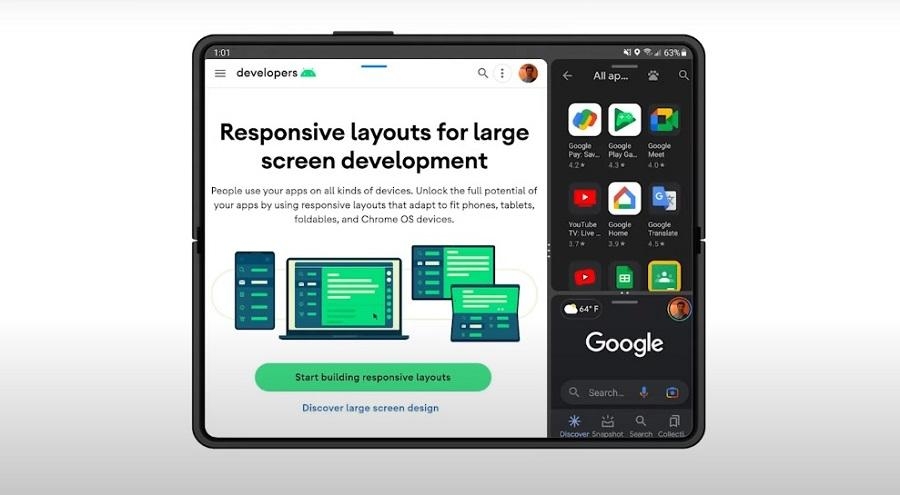 Google has finally addressed the growing market of tablets and foldable smartphones by announcing a version of the Android operating system designed specifically for larger screens. The OS, officially named Android 12L, was launched in developer preview this week.

Android 12L will offer several refinements on the UI and other features so their appearance would fit more with the screen sizes of tablets and foldable phones. Aside from improving how the OS looks on these devices, Google also aims to enhance the experience on larger screens by focusing on features for multitasking multi-column layouts.

“For example, on screens above 600dp, the notification shade, lockscreen, and other system surfaces use a new two-column layout to take advantage of the screen area,” Google said in a blog post. The Android 12L will also feature a new taskbar to make switching from one app to another easier.

Split-screen is one of the essential functions for multitasking on larger displays, so it is also one of the areas Google improved in Android 12L. In this version of Android, Google says all apps are enabled to support split-screen mode by default. Depending on app developers, windows for apps in split-screen mode can also be resizable. Android 12L should also allow developers to make their apps appear more native on tablets and foldable smartphones.

The announcement of Android 12L comes just several weeks after reports about Google’s first foldable Pixel phone appeared in the wild. Reliable sources, including Evan Blass, reported hearing about a Pixel device codenamed “Passport” purportedly planned to launch before 2021 ends. But it is unclear if the announcement of Android 12L hints at the foldable Pixel’s imminent launch.

However, the full version of Android 12L is planned to launch in 2022. “We plan to release the 12L feature drop early next year, in time for the next wave of Android 12 tablets and foldables,” Google said.