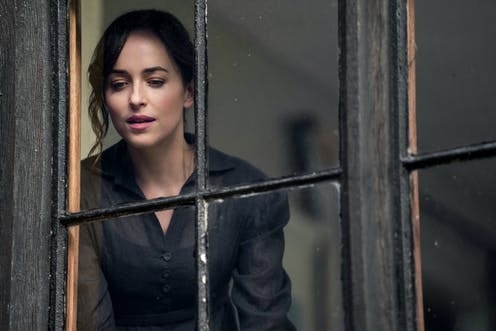 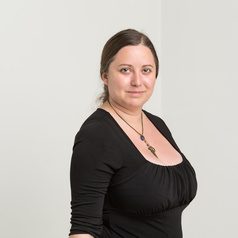 Netflix’s Persuasion is a surprisingly faithful adaptation of Jane Austen’s novel, in terms of plot structure. It follows the second-chance romance of Anne Elliot (Dakota Johnson) and Captain Frederick Wentworth (Cosmo Jarvis) through almost exactly the same beats and events as the book.

In terms of tone, however, this is a distinctly modern romantic comedy. As many have noted, this is Persuasion via Fleabag, complete with a heroine coping with her pain in unhealthy ways (this Anne drowns a lot of her sorrows in alcohol), and looks and direct addresses to camera that veer between the sardonic and the sincere. 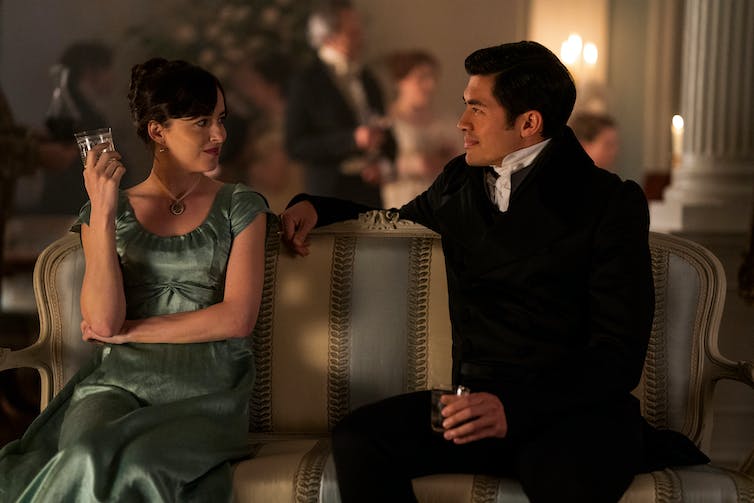 The modern historical romance is nothing new, as the millions of us who have watched Bridgerton know. This Persuasion is clearly in dialogue with Bridgerton, sharing its playful relationship to history. Lines like, “it’s often said that if you’re a five in London you’re a ten in Bath,” are clearly tongue-in-cheek, foregrounding the film’s modern sensibility against its romanticised historical setting.

However, I suspect Persuasion will find audiences less forgiving of this than they have been with Bridgerton. Bridgerton is adapted from novels published in the 2000s. Persuasion, however, is over 200 years old; published six months after Austen’s death in 1817.

Julia Quinn’s Bridgerton books are historical romances, in that they were written long after they were set, and we might therefore expect them to contain modern sensibilities. Persuasion, however, is a contemporary romance – it was set roughly in the same period in which it was written – which means that any 2000s sensibilities it might contain are inevitably imposed after the fact.

When we talk about historical accuracy, often what we are actually talking about is historical verisimilitude: whether something feels accurate, rather than actually is accurate.

Author Jo Walton describes this as the Tiffany Problem. Tiffany is a perfectly cromulent name for a character in historical fiction set in the medieval period, as it was a common nickname for Theophania. However, we are so used to considering this a modern name that reading a character called Tiffany would probably feel jarring. It might be accurate, but it doesn’t feel accurate. 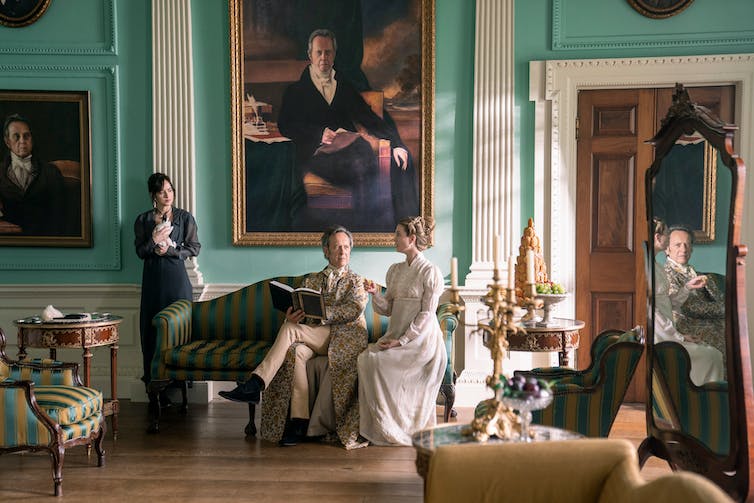 Historical accuracy is often about whether something feels accurate, rather than whether it is accurate. Nick Wall/Netflix

This phenomenon is common in adaptations with historical settings, sometimes for reasons we can’t quite put our fingers on. As writer Brandy Jensen quipped on Twitter in 2018, “some people just can’t be believably cast in a period piece like sorry Jessica Biel you have a face that knows about text messaging”.

Readers and viewers of fiction with historical settings have different tolerances for anachronism. We might think of this as a sort of verisimilitude metre – how far an individual consumer can go before they feel the illusion of the historical setting is broken.

This measure is also determined by the text itself, which is where I think this Persuasion might run into trouble. Because it is a contemporary rather than a historical romance – a product of its time rather than a product about a time – the tolerance level for deliberate anachronism will likely be somewhat lower for audiences than it was for something like Bridgerton.

Modern love: being an “ex”

Personally, my anachronism tolerance is quite high. As long as a loose and internally consistent historical vibe is maintained, I’m not especially bothered about whether the hairpins and the curtains are technically accurate.

For this reason, I enjoyed this adaptation of Persuasion quite a lot. The Fleabag-esque style and the some of the more modern dialogue will probably trip the verisimilitude metre of a lot of viewers, but I didn’t particularly mind. Indeed, because Austen’s Persuasion is such a deeply interior novel, I found the direct address to camera to be quite a good technique to convey Anne’s inner life.

This is not to say that there was nothing that jarred. I might not care about hairpins, but I struggled with Anne’s description of herself and Wentworth as “exes”. In Britain in the period in which this is set, divorce was only possible through an Act of Parliament. 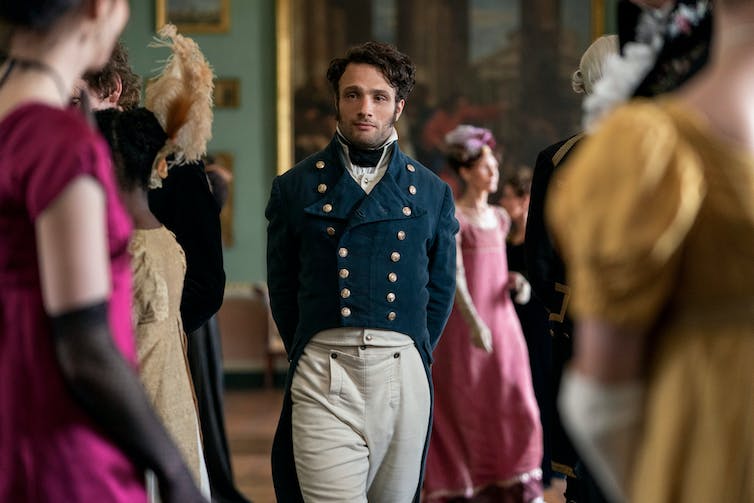 Anne wouldn’t call Captain Frederick Wentworth (Cosmo Jarvis) her ‘ex’ in the period in Britain when Persuasion was set – it wasn’t yet a concept. Nick Wall/Netflix

While there were broken engagements, like Anne and Wentworth’s, the idea of the “ex” as a social role is distinctly modern. Part of Anne’s struggle in Persuasion is that she doesn’t know how to relate to Wentworth now, eight years later. Being able to name what they are to each other felt a bit too easy.

This is tied into what I felt was the adaptation’s greatest flaw. In one of the few departures from/additions to Austen’s plot, Anne and Wentworth have a conversation in Lyme where they decide to be friends.

This seemed to me to be tied into a very modern conception of what a breakup should be, a journey towards amicable ex-hood. However, the effect it had was to bleed tension out of their romantic dynamic, giving Anne and Wentworth a narratively unnecessary degree of comfort with each other.

Perhaps more importantly, it also gave their relationship a sort of closure, and the film had to work hard in the second half to open it back up again – particularly with an actor as charming as Henry Golding playing Mr Elliot, Anne’s other potential love interest.

This is an indication of where my personal verisimilitude metre is set. If the imposition of modern sensibility makes the narrative less cohesive, it jars.

Your mileage, however, may vary. If you care about the hairpins, this adaptation is not for you (and I suspect there will be many viewers in this camp). If you’ve got a high tolerance for anachronism, though, this Persuasion is a very enjoyable couple of hours.