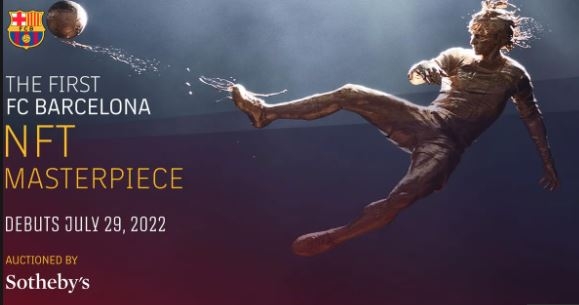 Entitled “In a way, Immortal”, the NFT will be auctioned off at Sotheby’s on July 29.

Entitled “In a way, Immortal”, the NFT will be auctioned off at Sotheby’s on July 29.

The NFT's buyer will also receive the title of Barça Digital Ambassador.

The smart contract for the NFT gives users access to benefits like meet-and-greets and five years of hospitality rights, among others.

Four more NFTs that each depict a still image from the 1973 goal will be auctioned in addition to the animated NFT. The auction starts on July 29.

The first of FC Barcelona's ten planned pieces of art is this NFT. Each article will include significant events and notable club members. All of this is a part of FC Barcelona's initiatives to interact with its younger fan base by utilizing NFTs as an immersive product to build its brand.

FC Barcelona already has NFTs as part of a deal between La Liga and Sorare for player cards used in fantasy football games.

Ultimately, FC Barcelona’s decision to launch its own NFTs and metaverse show its intention to capitalize on the emerging trend and aid its finances.

According to FC Barcelona President Joan Laporta, they believe that with their new NFT strategy they have found a unique opportunity to continue growing and consolidating the Barça brand.