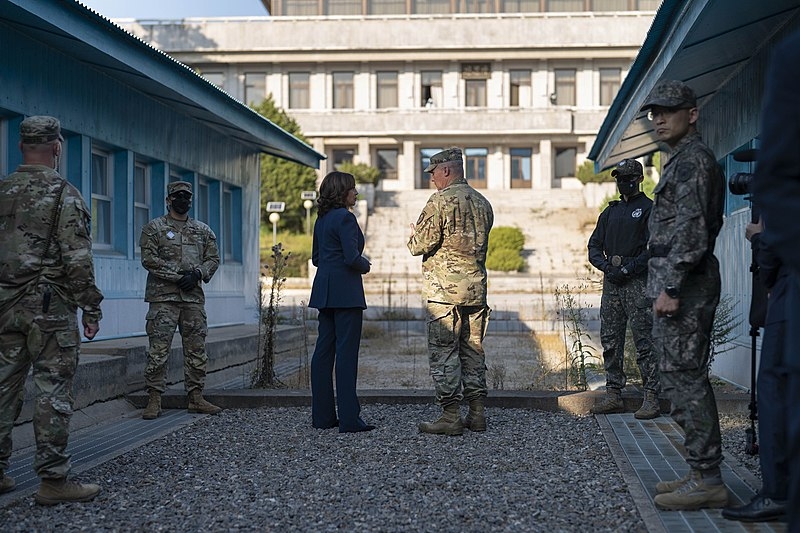 United States Vice President Kamala Harris visited South Korea as part of her Asia tour, including a stop at the demilitarized zone separating the two Koreas. In her remarks at the DMZ, Harris sharply criticized North Korea, citing its dictatorship and human rights violations.

Harris issued stark criticism toward North Korea during her first visit to the DMZ last week, noting that the border showed a stark contrast between the two Koreas, a reminder of the “dramatically different paths” that North and South Korea have taken. Her remarks came before Pyongyang launched two missiles hours after leaving South Korea.

“In the North, we see a brutal dictatorship, rampant human rights violations, and an unlawful weapons program that threatens peace and stability,” said Harris.

“The United States and the world seek a stable and peaceful Korean peninsula where the DPRK is no longer a threat,” added Harris, referring to the initials of North Korea’s official name, the Democratic People’s Republic of Korea.

Harris visited the DMZ after arriving in Seoul Thursday last week, where she met with President Yoon Suk-yeol.

The White House said both Harris and Yoon condemned Pyongyang’s increased nuclear rhetoric and its multiple weapons tests while discussing the response to potential provocations by the isolated nation in the future, including trilateral cooperation with Japan.

The White House also said that Harris and Yoon reiterated the goal of the complete denuclearization of the entire Korean peninsula.

Yoon’s office said that should North Korea continue with its provocations such as nuclear threats, Seoul and Washington agreed to the immediate enforcement of “jointly prepared countermeasures” but did not disclose further details.

The US Indo-Pacific Command said Friday last week that it is aware of North Korea’s latest two ballistic missile launches. However, it said that the incidents do not pose an immediate threat to US personnel or territory or to its allies.

“The missile launch highlights the destabilizing impact of the DPRK’s unlawful WMD and ballistic missile programs,” the US combatant command said in a statement. “The US commitments to the defense of the Republic of Korea and Japan remain ironclad.”