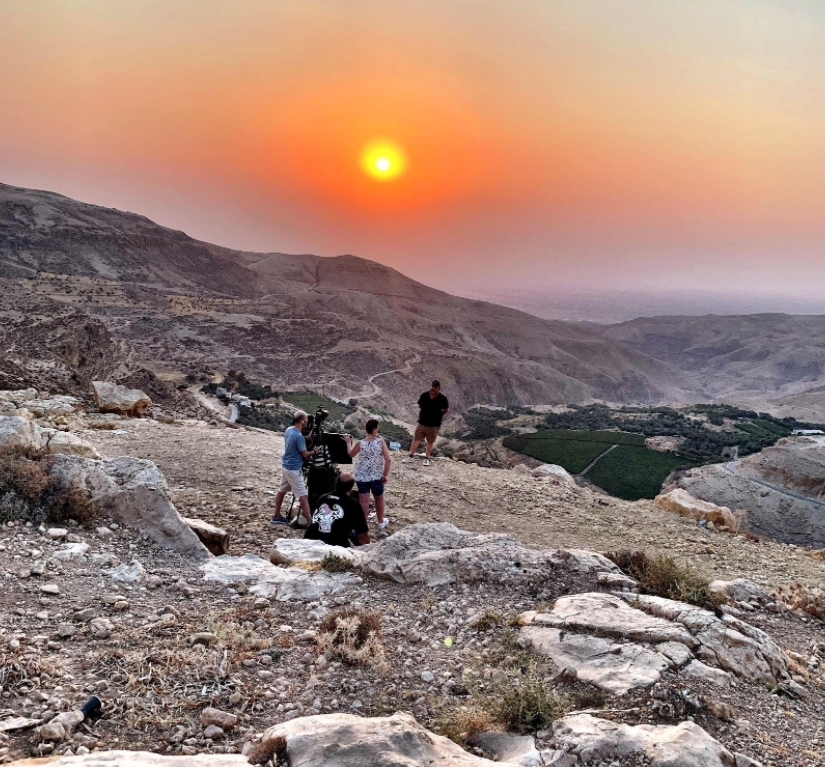 In the Muslim militarized zone of the Jordan Valley overlooking Jericho and the Dead Sea where Moses is buried, Phil Fischer of Jesus Lives preaches a powerful sermon to a crowd Muslims. The video of his sermon on YouTube, watched by over 50,000 people since its posting on August 19th, 2021.

From internet entrepreneur and musician to evangelist around the world

Born in Texas and raised in Alaska and Canada’s Yukon territories, Phil Fischer didn’t grow up a Christian. He lived in and of the world for decades, both as a successful musician composing and selling songs to record labels in Seattle and Portland in the 1990s and as an internet entrepreneur starting what would become the world’s first web design firm in 1989.

Fischer believes he was using his god-given gifts, but it wouldn’t be until he started using his gifts to serve god rather than to make money that he would find fulfillment and happiness. He got saved in Seattle in November 2001 when he met his now-wife, Jamael Fischer, who led him to Christ. Jamael, a faithful attendee of New Hope International Church since she was nine years old, has always been passionate about reaching out to non-Christians and praying for them to find Jesus.

The founding of Jesus Lives

After finding Christ in the early 2000s, Fischer began spreading the gospel in Seattle and around the world from Pakistan to Jerusalem to Jordan. Using his gifts as an evangelist and pastor, Fischer founded non-profit evangelical mission’s organization Jesus Lives in Bellevue, Washington with the mission to lead people to Christ in an ungodly region of the world.

Jesus Lives believes that we live in a world at war, and are at the beginning of the end times. They want people to get saved, the lost to be found, the blind to see, and lives to be changed. They believe that Jesus Christ is God incarnate, salvation is by grace alone through faith in Christ, and that Christ will be returning to Earth to usher in the emergence of a victorious Church that will experience an unprecedented unity, purity, and power in the Holy Spirit.

In 2016, when there were only two members of Jesus Lives, Fischer began receiving prophetic messages - first from a Bethel Pastor and again a year later from Rodney Howard Browne - that revival was going to happen in Seattle and to prepare for the ministry to explode. He followed Jesus’ call through Jesus Lives, where he can be found preaching every Thursday and Saturday evening at 7:30 pm. Today, Jesus Lives has reached thousands of people with its teachings - a far cry from its humble roots.

As time went on, Fischer was called to share the gospel with the world, not just Seattle. “The evangelist is my gifting,” he says. “It’s the hands that are always reaching out to souls trying to lead people to Christ so they, too, can get saved. I would rather crash and burn and get laughed at through the centuries than leave my gifting buried in the Earth. I will not do that. I’m going to use my gifting and you should, too.”

But why travel to the Middle East, a region that’s over 80% Muslim? Fischer feels that everyone needs to know how great, how wide, and how deep the love of Christ is. “What I learned from preaching in Jerusalem, Palestine and Jordan is that they are on fire for the Holy Spirit. This may seem strange, but it's easier to lead a Muslim to Christ than someone from Seattle. At least they believe in Jesus, and that's a great starting point,” He explains.

Here on Mt. Nebo in Jordan, on the land where Moses died and was buried, Fischer preaches about the fivefold giftings.

“Many of us are living in a spiritual desert. We haven’t been able to cross over into the promised land. People spend their lives dreaming about a future and then they get into a desert place where it seems like nothing ever changes and blessings never come. In a holding pattern, months and years go by and you never receive your blessing. That’s exactly what happened to Moses,” He says. “This teaching is for anyone who feels like they can’t get into their own promised land, like they’re stuck in a desert place with no hope.”

According to Fischer, if you want to make it into your promised land, you must start using your giftings. The fivefold ministry is an ascension gift ministry given to every one of us when Jesus ascended into heaven. When Jesus ascended, he broke his whole ministry into five parts and gave it to all of us.

“These five giftings, abilities, talents, specialties - each of us has at least one. He spread these giftings throughout the entire church, the body of Christ, because these giftings are needed to perfect, mature, and equip the people living here on Earth,” Fischer explains.

The five giftings are the gifting of the apostle, the heart of compassion and advancing the kingdom of God; the prophet, who hears from the spirit of God and communicates it to the body of Christ; the evangelist, who reaches out to souls to save people through Christ; the pastor, who is the feet leading people to paths of righteousness; and the teacher, who brings wisdom and understanding to the body of Christ. Each gifting has a specific, powerful role to play.

“This is all right here in the Bible. Each one of you has one of these giftings and they are so powerful. Whether you’re living completely in sin or not, you still have the giftings. And you need to begin using your gifting otherwise you’ll be stuck right here like Moses,” Fischer encourages.

For people who don’t understand what their gifting is, Fischer invites them to turn to Christ, who will reveal it to them. “And once you begin to show loyalty to that one gifting,” He continues. “Miracles occur that defy all human understanding. When you come to Jesus, he will give you these giftings. He will help you understand your gifting. When you understand your gifting, God will give you another or sprinkle one or more of the giftings on you and help you use them.”

Beyond the fivefold giftings are gifts or fruits of the Holy Spirit. When you begin to follow your gifting and serve Jesus, these are the fruits that manifest in you.

“When someone is living in sin, say they decide to come out of sin. Say they get into a good Bible-based church, finally decide to accept Jesus, get saved, get baptized, begin to use their one fivefold gifting, and come under submission of a leader, a metamorphosis occurs. You begin to manifest fruits of the Holy Spirit when God sees your heart,” Fischer explains.

The gifts or fruits of the holy spirit are bestowed upon you according to your worthiness and ability to receive the gift, and they include the gifts of wisdom, knowledge, faith, healing, miracles, discerning spirits, tongues, interpreting tongues, administration, and helping.

“These gifts are unique skills and abilities that begin to manifest when you start to use your own fivefold gifting given to faithful followers of Jesus for the common benefit of his people. When God sees your heart, he starts to sprinkle fruit in you. Come to Christ and manifest fruit, depending on your hunger and your god-given destiny,” Fischer preaches.

He demonstrates his point through the story of Pastor Lao, his pastor in the U.S. When he first began using his gifting, he could barely speak English. As he used his gifting, he became stronger with Christ. When God saw him using his gifts so faithfully, God blessed him with the pastor gifting. When God saw him use that gifting faithfully, he added a third gifting a few years ago - evangelism.

“Now, he’s out spreading the gospel in Thailand, Germany, all over the world,” Fischer says. “When you step into your gifting and strengthen your relationship with Jesus, you will step into a God destiny so powerful you will fall in place with the saints, with history. You will not be denied entrance to the promised land,” he promises.

Fischer’s last words for the people of Jordan

“God is coming back and you need to begin to learn to use your giftings. You need to use your talents, or you will lose them. Don’t leave your giftings lying in the Earth or you will be stuck here, never to enter the promised land. Many of you are stuck on Mt. Nebo waiting to enter here. God is looking for true disciples. If you want everything you own to be turned to gold, serve God,” Fischer concludes. If he can use his gifting, he promises, so can you.