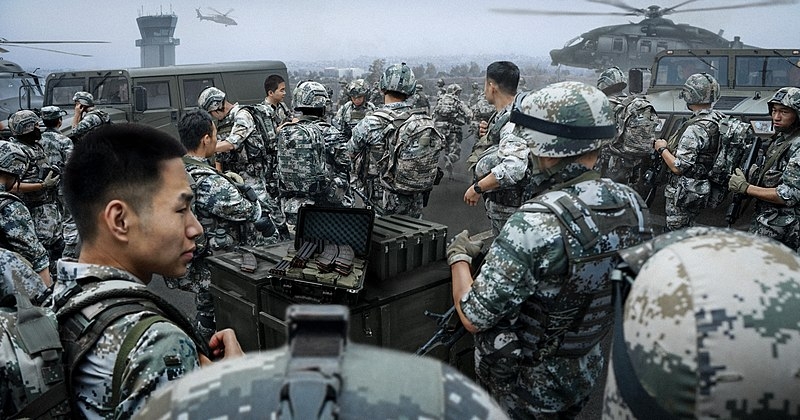 Both China and Taiwan are ramping up their respective military forces amidst fears of a possible military conflict between the two nations. Following the recent video footage of Chinese soldiers carrying out invasion drills at a nearby beach, Beijing has attempted to downplay the drills as moves to protect peace and stability.

Express reports the spokesman for China’s Taiwan Affairs Office, Ma Xiaoguang addressed the recent reports of People’s Liberation Army soldiers carrying out drills near Taiwan. The drills come as concerns of a possible full-scale invasion by China onto the island nation have been more evident despite pledges by Chinese President Xi Jinping to reunify Taiwan with China in a peaceful manner. This also follows the formal stance taken by Taiwanese leader Tsai Ing-wen against reunification with China amidst the pressure campaign Beijing is engaging in to get Taiwan to submit to China.

“These are absolutely just actions,” said Ma, regarding the military drills being carried out by Chinese soldiers in the region. “The DPP authorities hyping of the so-called ‘military threat’ of the mainland is to completely invert right and wrong and a bogus accusation,” added Ma, referring to Taiwan’s Democratic Progressive Party.

Ma also claimed that the cause of tensions is Taiwan’s alliance with other nations and making provocations for the sake of maintaining independence. China claims Taiwan is part of the mainland under its One China Policy, but Taiwan and its democratic government have resisted the pressure, insisting that it is an independent state. While the US does not officially recognize Taiwan as an independent state, Washington has deployed US forces in an effort to protect the island.

The presence of western forces in the Indo-Pacific region in a bid to deter China has also led to rising tensions in the area. The US, Australia, and the United Kingdom recently established an AUKUS deal believed to be a strategy to deter China’s increasing aggression in the region, with the US and the UK supplying Australia with nuclear-powered submarines.

Recent satellite images have suggested that China is developing a new model of Unscrewed Surface Vessels of USVs, as seen docked at the piers of the north China coast miles off the Xiaopingdao naval base. The new models appear to be similar to a previous type of ship China has made, the JARI or Jiangsu Automaton Research Institute.