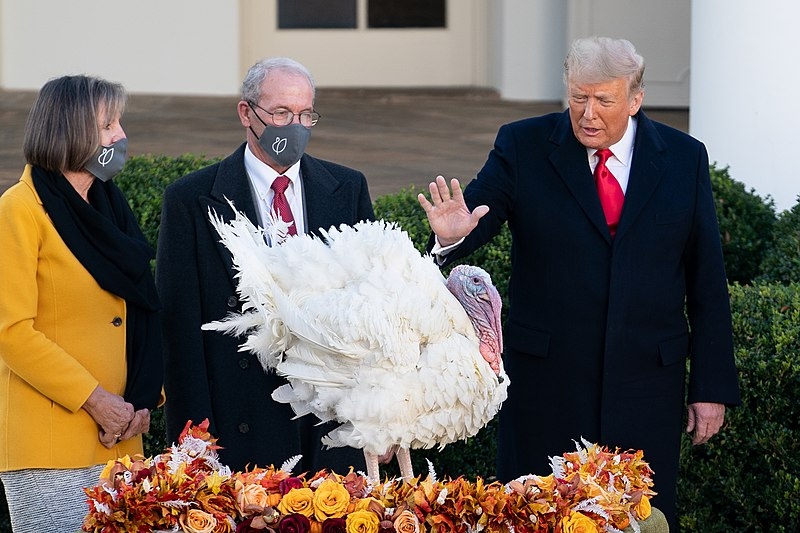 Donald Trump to this day has refused to accept defeat nor acknowledge the election win of Joe Biden and has lashed out on officials who have now leaned towards his opponent. Following the White House turkey pardon, Trump attacked former Defense Secretary Jim Mattis for his advice to the president-elect.

Earlier this week, Trump blasted Mattis on Twitter and called him an overrated general. The outgoing president then said that he should have fired Mattis earlier and that the Pentagon was doing better after his dismissal. Mattis left his post in 2018, citing disagreements with the administration’s treatment towards the allies of the US all over the world. Mattis also reportedly opposed Trump’s move to withdraw troops from Syria. During the White House turkey pardon, Trump addressed the attendees and reiterated his “America First” policy.

“We send our love to every member of the armed forces and the law enforcement heroes risking their lives to keep America safe, to keep America great, and as I say, ‘America First.’ Shouldn’t go away from that. America first,” said Trump during the event.

Trump’s reiteration of his policy comes as Mattis wrote a piece in the Foreign Affairs magazine advising Biden to remove the mindset from their foreign policy strategy. Mattis said that Biden and his administration should immediately revise the national security strategy and by doing so, remove the “America First” mindset “from its contents, restoring in its place the commitment to cooperative security that has served America so well for decades.” The former general also stressed the importance to restore the network of alliances.

Meanwhile, with less than two months left until the inauguration of Biden into the presidency in January, Trump remains desperate to cling to power by trying to overturn the election in his favor through lawsuits. The lawsuits have been mostly unsuccessful and have been dismissed by judges in the states Trump needed to win. Following the dismissal of the lawsuit in Pennsylvania, the outgoing president has invited Republican lawmakers from the state to the White House.

The invitation follows the “hearing” the said lawmakers hosted in Gettysburg over their unfounded accusations of fraud for which they have yet to produce evidence. Trump was initially supposed to join his lawyer Rudy Giuliani in Gettysburg but canceled.