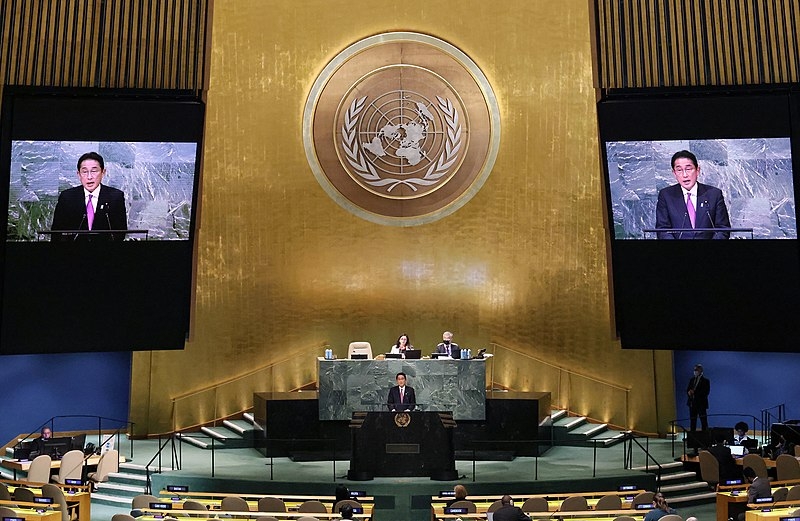 Japanese Prime Minister Fumio Kishida condemned the ongoing war in Ukraine during his speech at the United Nations General Assembly in New York this week. Kishida also expressed frustration at the response by the UN Security Council over the war and called for reforms.

Kishida said Russia’s invasion of Ukraine goes against the principles stated in the United Nations charter in his remarks. Kishida also called on for reforms in the system of the UN Security Council, of which Russia is one of the five members with veto power.

Japan has long sought reforms in the UN Security Council, citing that it was designed for those who won World War II and does not reflect the reality of international society. Since 2004, Japan has pushed for a reform plan with India, Brazil, and Germany. Starting in January, Japan will be among the non-permanent members of the UNSC.

“Russia’s invasion of Ukraine is a conduct that tramples the philosophy and principles of the UN charter…It should never be tolerated,” said Kishida. “We must face the reality that the integrity of the United Nations is at risk because of the invasion of Ukraine by Russia, which is a UN Security Council member.”

Kishida added that reforms have been being discussed for years and that it is time to take action instead of only discussing. Kishida, who hails from Hiroshima, which suffered an atomic bombing, also condemned Moscow’s latest nuclear weapons threat.

“The threat of nuclear weapons like what Russia did this time, let alone the use of them, are serious threats to peace and safety of the international community, and are never acceptable,” said Kishida.

Zelenskyy urged the organization to punish Russia for its invasion and called for a special tribunal to strip Russia of its veto in the UN Security Council. Zelenskyy’s speech came hours after Vladimir Putin ordered 300,000 of Russia’s reserve troops to mobilize.

Zelenskyy said Kyiv has drafted a five-point plan for peace that included holding Moscow accountable for its aggression and also to restore Ukraine’s security and territorial integrity with a provision of security guarantees.