Goldman Sachs confirms the opening of its new office in Birmingham

Chicken franchises in S. Korea rose in 2020 amid the pandemic crisis

LG Electronics, Magna joint venture to sign a deal with Apple for its EV project 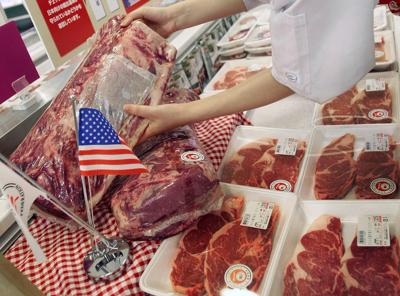 US beef exports recovered by year-end with the combined November and December figures increasing 12.6 percent on-year.

US beef exports are expected to increase in 2021 and post their second-highest level after the 2018 figures with soaring demand from China and Hong Kong and recovery of exports to Mexico.

The US exported 2,566.7 million pounds of beef in 2020, down 2.3 percent from the previous year but still the third-largest annual beef export total.

The COVID-19 pandemic disrupted beef exports last year, with monthly exports down more than 30 percent on-year in May and June.

Japan and South Korea account for a combined 51 percent of total US beef exports in 2020.

Japan is the US's largest market, increasing by 3.7 percent in 2020, to reach its second-highest level after dropping in 2019 from the all-time peak recorded in 2018.

South Korea is the US's second-largest beef export market since 2016. It is the fastest-growing beef market in terms of volume. Exports to South Korea declined by 2.1 percent last year from the 2019 peak.

The third-largest US beef export market from 2014-2019 was Mexico, but shipments dropped 24.7 percent on-year in 2020 due to the effects of the pandemic and macroeconomic weakness.

While beef exports to Mexico plunged by an average of over 56 percent on-year from April to September, the figures went up 50.7 percent in November and December.

Meanwhile, the combined shipments to China and Hong Kong jumped 28.8 percent to become the third-largest export market for US beef.

Beef exports to Canada, the fifth-largest beef export market, increased 6.8 percent in 2020, while those to Taiwan, the number six market, were unchanged in 2020.