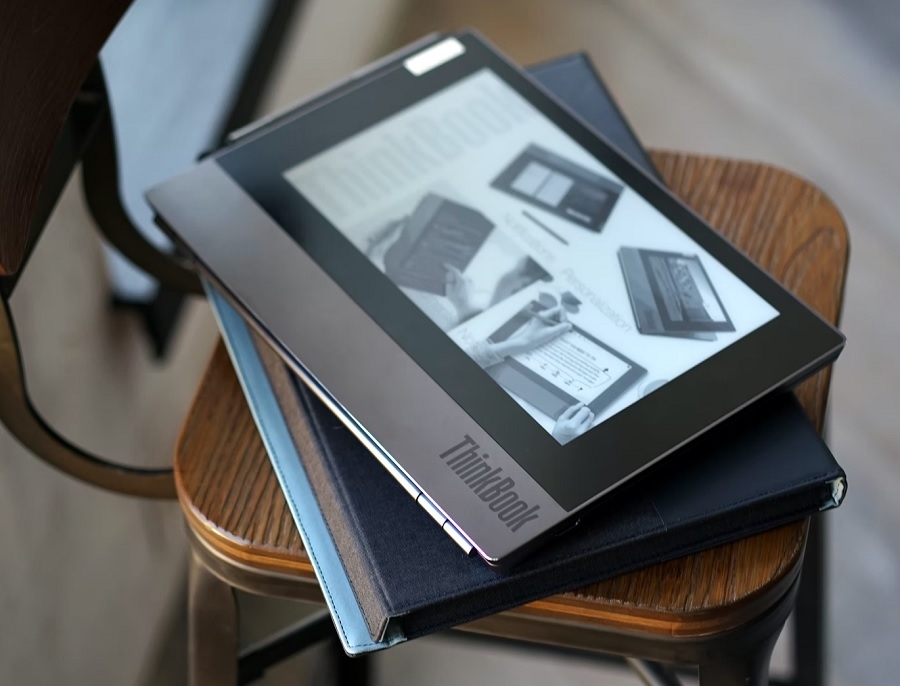 Lenovo usually unveils a new series of laptops early in the year, and one of the upcoming products may have leaked already. The next generation of ThinkBook Plus, likely to be released in a few months, could be larger than its predecessors due to the addition of a secondary display beside the keyboard.

The ThinkBook Plus laptop was first introduced in 2019 and has been the only model in the series that has a secondary display. It also has a magnetic side where users can place their stylus pen since one of the main features of the device is its support for e-Ink.

While a secondary display is still anticipated as one of the exclusive features of the next ThinkBook Plus, it appears that Lenovo is planning on implementing some significant design changes. Reliable leaker Evan Blass has posted a series of renders of unannounced tech products recently, including what could be the next ThinkBook Plus.

Have you guys seen this yet? 17-inch ThinkBook Plus from Lenovo... pic.twitter.com/OElc5ZM3pb

Blass reported that the device would have a 17-inch form factor, which is a few inches larger than the second generation of ThinkBook Plus. As shown in the render Blass leaked, the next ThinkBook Plus will have a wider main screen, while a secondary display sits on the right side of the keyboard and trackpad.

The leak, however, does not provide a look at a different angle of the laptop. It is then unclear if the display beside the keyboard will be the only secondary screen. The first and second generations of ThinkBook Plus both had their secondary displays on the back of the main screen.

There was also no information provided on the size of the secondary screen, as seen in the ThinkBook Plus leak. So, it remains to be seen if it is going to be the same size, smaller, or larger than the 12-inch e-Ink display on the ThinkBook Plus Gen2.

Another interesting detail that appears in the leak is that the secondary display appears with a mockup of a photo-editing tool. Previously, the e-Ink display has been advertised mainly for note-taking and the creation of business presentations. It is then possible that Lenovo plans on improving the range of tasks that will be supported by the next ThinkBook Plus.

The technical specifications of the upcoming ThinkBook Plus are still unknown, but the use of Intel Core 12th-generation Alder Lake chips is one of the likely upgrades. Lenovo might announce a host of new laptops in January 2022, just like in the previous years.

Photo by Lenovo on Unsplash