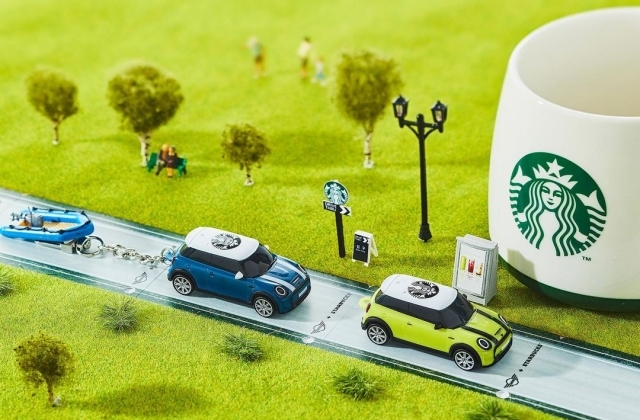 Starbucks Korea and Mini Korea recently teamed up to release special beverages, a new menu, and some merchandise. As per The Korea Herald, the coffee chain company and the Korean unit of the German auto marque announce the availability of three new drinks, two food items, three voucher cards, and six nice merchandise items.

Starbucks Korea and Mini are collaborating for the mentioned products just in time for the summer. They are also promoting family and friends’ bonding time through the new releases.

In fact, the slogan for this promo campaign reads: “We’re different but pretty good together.” The Korea Herald stated that the campaign has been organized to show respect for diversity.

In any case, the three new drinks to enjoy at Starbucks Korea in collaboration with Mini include Zest Green Blended, Ruby Red Chilling Ice Tea, and Rooftop Gray Latte. The first drink is a blend of apples, sweets, and lemons, while the second one was made with mint, lime iced tea, and three grapes. For the third MINI beverage, it is a refreshing bean latte topped with black sesame cream.

For the merchandise, there are new tumblers that feature the colors of MINI Convertible Cooper, which are apple green, green and blue. There are also Starbucks brewing cars that can be used by customers.

It was said that both Starbucks Korea and MINI would accept applications for customers for a visit of the brewing car. Drinks that can be churned out in the brewing car offer the same high-quality beverages that can be bought in regular Starbucks retail outlets. Thus, customers can expect to see the smallest Starbucks store in the world, built on the MINI cars.

Ten lucky applicants based in South Korea will be picked from the submitted entries, and starting Aug. 6, one of the three MINI+Starbucks brewing cars will visit the lucky applicants at their chosen locations. Once there, the car will provide coffee and other house drinks.

What’s more, the selected applicants will also be given a MINI+Starbucks RFID card that is loaded with KRW100,000 or around $86 value as a gift. The new food items were not mentioned yet, and probably, they would be revealed any time soon.