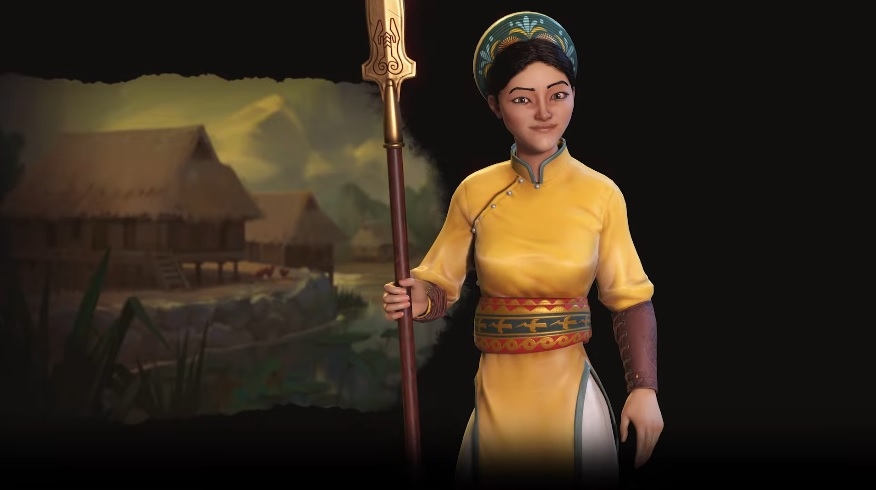 The fifth installment to the "Civilization 6" New Frontier Pass called the Vietnam and Kublai Khan pack is launching next week. While Kublai Khan will be the new alternative leader for China and Mongolia, the Vietnam civilization is getting its own fierce leader — Lady Triệu.

Lady Triệu, also known as Bà Triệu, is famous for her historical contributions to Vietnam's real-life civilization. She has been regarded as a fierce warrior who led the resistance against the occupation of Vietnam. Lady Triệu is going to be an exciting addition to "Civilization 6," and it is noteworthy that her in-game ability and agenda fits well with her known historical contributions.

Taking hints from that, Lady Triệu's ability in "Civilization 6" is called Drive Out the Aggressors. It gives her units extra Combat Strength points when they fight on rainforest, marsh, and woods tiles.

"Civilization 6" players can get an increased value of Combat Strength when the fight is happening in Vietnam tiles. Lady Triệu's agenda is called Defender of the Homeland that means she will be friendly toward civilizations that do not pose threats of occupation on Vietnam.

Aside from Lady Triệu, the Vietnam civilization will also be released on "Civilization 6," with several unique features. Voi Chiến will be the civ's special unit composed of bow-wielding warriors riding on elephants with added movement and sight points and can move even after they attack. Thăng Long will be the Vietnam civ's unique district that gives off culture points to adjacent districts.

One of the Vietnam and Kublai Khan pack highlights is the new "Civilization 6" game mode called Monopolies and Corporations. Before this new mode, having multiple luxury resources of the same kind does not have many benefits except when the players are using the alternative leader Magnificence Catherine.

With Monopolies and Corporations, players can unlock a new improvement called Industry if they have duplicate luxury resources. With the Industry Improvement, "Civilization 6" players' city will get additional Food, Production, and Gold.