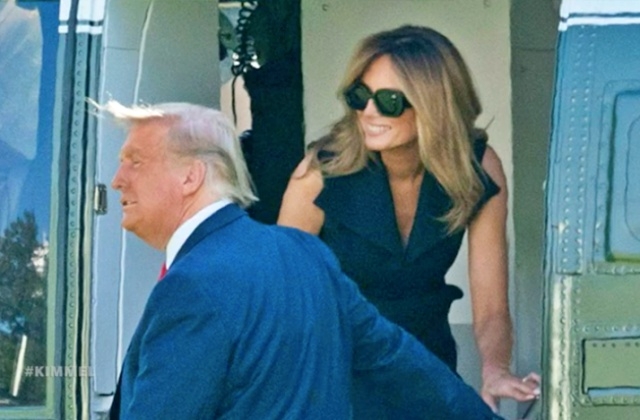 Melania Trump finally appeared in public again after canceling her appearance at a campaign rally in Pennsylvania last week. She went with Donal Trump to attend the final presidential debate on Thursday that was held in Nashville, Tennessee.

Then again, it was not the debate that got attention when Melania Trump flew on a helicopter with Donald Trump to get to the venue of the debate. It was the First Lady’s appearance that became the talk of the town when the hashtag #FakeMelania trended on social media.

Nevertheless, the fake Melania conspiracy theories are back again after seeing the photos of the FLOTUS while she was coming down from the helicopter. What made people think that a body double was allegedly used once again was her expression while getting off from the chopper.

Most of Melania Trump’s photos show her with gloomy, straight or simply in bad mood expressions but in her first outing after recovering from COVID-19, a photo showed her smiling wide which rarely happens. Plus, people are commenting that the way she smiles in the picture is different and her teeth seem to be off as well.

Now people are saying that this is another one of those special appearances of Melania Trump’s body double. Her critics are convinced they are seeing the fake First Lady again and they posted what they think on social media. After reading their reason for suspecting that the person who was with the POTUS is not the real FLOTUS, many agreed she is just a look-alike of Donald’s wife.

“Obviously I don't believe in conspiracy theories but: #FakeMelania,” comedian David Baddiel tweeted. He also included a photo of Melania with a gloomy expression and tagged it as “#RealMelania.”

Another one also reposted Melania Trump’s smiling photo and wrote in the caption: “Meanwhile, back in New York, the Real Melania is having a lovely time Googling photos of Barack Obama with his shirt off. #FakeMelania”

The Scotsman reported that the fake Melania Trump conspiracy theory first emerged in 2017. People suspected that the White House hired someone to use as her body double so the First Lady can be present anywhere she needs to be.

“Once again, we find ourselves consumed with a ridiculous non-story when we could be talking about the work the first lady is doing on behalf of children, including the opioid crisis that is gripping our nation," Grisham said at the time.