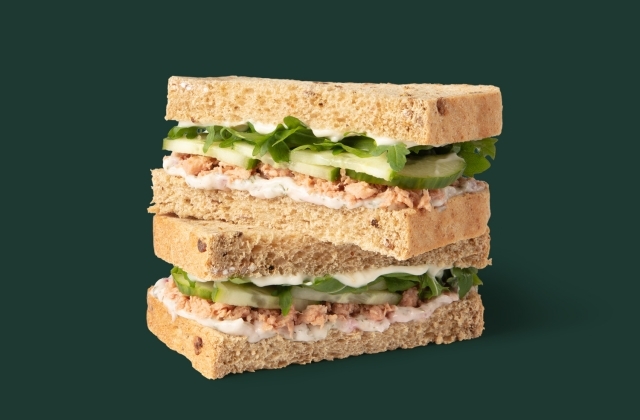 Starbucks UK has unveiled a new plant-based sandwich, and it is simply called the Tu'Nah Sandwich. The new vegan sandwich option has been added as the popularity of going “meatless” is going up fast.

This means that more and more people prefer to go vegan, and it is not just about being healthy, but the choice is also about choosing to be environmentally friendly. While customers of Starbucks UK are familiar with the chicken sandwich or salad in the stores, the arrival of the plant-based tuna sandwich is something new.

As per Mashed, the UK unit of the American coffee chain is has started offering the Tu'Nah Sandwich last week and as posted on the Starbucks UK’s website, the vegan tuna is made from pea protein which serves as the alternative to tuna flakes. The sandwich is completed with the addition of veggies and dressings including cucumber, red onion, horseradish sauce, vegan mayo, and rocket on malted bread.

It was also mentioned that the plant-based tuna sandwich in Starbucks UK is very different from the ones that can be made at home since it has special dressings that are exclusive to the coffee chain. In any case, the new food item is not the restaurant’s first vegan option but it is the newest addition to Starbucks' alternative range that includes seafood salad that features the Omni crab cake, plant-based meat, and other fresh salads with “meatless” meats.

The Tu'nah Sandwich being offered at Starbucks UK will only be in stores for a limited time. So far, the item has good reviews from those who have already tried it. One Twitter user even gave the sandwich a rate of 10/10 and described the texture, taste, and smell to be perfect.

Wow @StarbucksUK have totally nailed it with this one. Taste, texture and even smell just like Tuna -10/10 ???????? And no fish were harmed! ???? #veganfood #plantbased #starbucks pic.twitter.com/NFhsXqPrP0