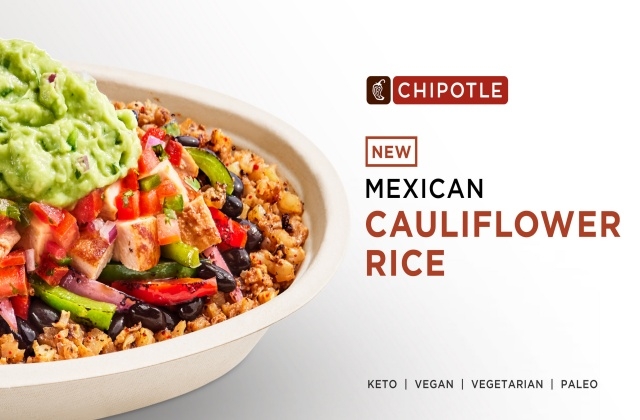 Chipotle Mexican Grill Inc. is adding more plant-based options to its menu, and now it is testing its cauliflower rice once again. The fast-casual restaurant chain proceeded with its second round of trial as the menu item was said to have helped bring in new customers when it was added to the menu list last year.

As per CNBC, Chipotle said on Thursday, June 16, that it would be testing its Mexican cauliflower rice in select locations in Wisconsin, Arizona, and Southern California. The fast-food chain is releasing the food at 60 stores for a limited time.

The company said that this new product has been seasoned with several spices such as paprika, garlic, and cumin. This is very suitable for all customers, especially those who are into the keto diet, vegetarians, vegans, and those practicing the paleo diet. Customers can order the veggie rice alongside other menus for a small additional cost.

This is Chipotle's second test, and the first one was last year when it offered cilantro-lime cauliflower rice at all Chipotle restaurant outlets in the U.S. and Canada. The customer response was very favorable and attracted many new customers in January 2021.

"After the success of our Cilantro-Lime Cauliflower Rice last year, we are eager to test a second plant-powered start for any go-to order," Chipotle's vice president of culinary, Nevielle Panthaky, said in a press release. "Our guests crave real, plant-based options so we developed a new flavor-packed recipe that aligns with our Food with Integrity standards."

The cauliflower rice is prepared in small batches, so it is served fresh to customers every day. The food is seasoned with the signature spices of Chipotle to achieve the rich Mexican flavor.

The new item has been created to make healthy eating easy and more accessible to customers. The company's culinary experts made this with all lifestyles in mind and will not make people gain extra weight even if they eat some "rice."

Finally, the Chipotle Mexican Cauliflower Rice is available now, and orders with other food items worth $10 or more will get to enjoy a free delivery offer.