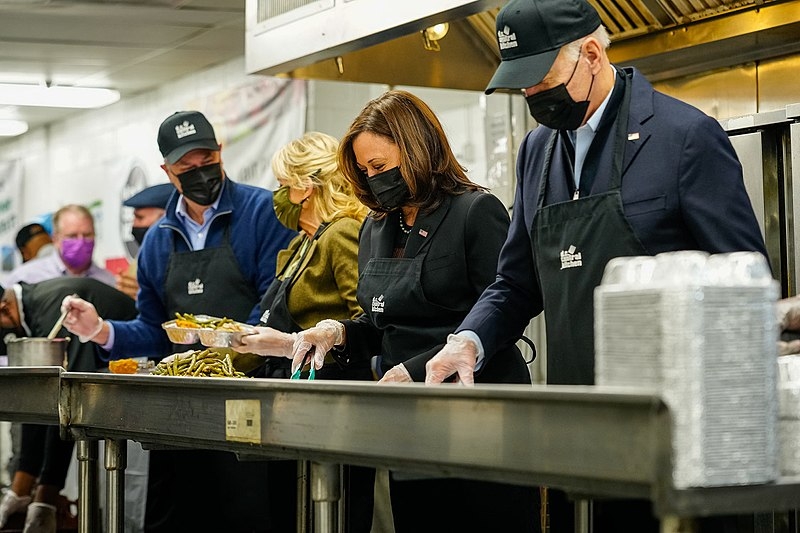 This week marks the Thanksgiving holidays for the US, with many looking forward to holding their celebrations in person since the pandemic began. US President Joe Biden, Vice President Kamala Harris, and their spouses took part in a food kitchen in Washington DC before they left to celebrate the holiday respectively.

Biden, Harris, along with first lady Dr. Jill Biden and second gentleman Doug Emhoff, assisted in a food kitchen in DC before they were to leave for the Thanksgiving holidays, according to the Associated Press. The four of them donned aprons of the food kitchen, which serves cooked meals and training for culinary jobs. They served turkey, gravy, green beans, and sweet potato casserole in trays that would be packed and served to those in need.

The Bidens later left for Nantucket, Massachusetts, to celebrate their Thanksgiving holiday with family, resuming their family traditions that were put on hold in 2020 due to the pandemic. The first family arrived on the small island Tuesday night, staying in the home of billionaire and family friend David Rubenstein as they have done for years. Biden is expected to return to Washington on Sunday.

Aside from assisting in the DC Central Kitchen, the Bidens also served Thanksgiving meals to military service members and their families in Fort Bragg, North Carolina, Monday. Dr. Biden also kicked off the holidays at the White House when she received the White House Christmas tree that would be placed in the Blue Room of the executive residence as the centerpiece.

Right-wing media outlets like Fox News have called out Biden for deciding to spend the Thanksgiving holiday at Rubenstein’s home in Nantucket. Former Biden campaign surrogate Kevin Walling weighed in on the US leader’s Thanksgiving vacation plans, which were described as “lavish” by the network’s contributor Liz Peek. Walling was quick to point out that Biden would get criticized for everything he decided to do, including vacation plans.

Walling also reminded the panel that Biden’s immediate predecessor, Donald Trump, frequently spent time at his Mar-a-Lago resort in Florida, charging taxpayers through the massive bills of the Secret Service.