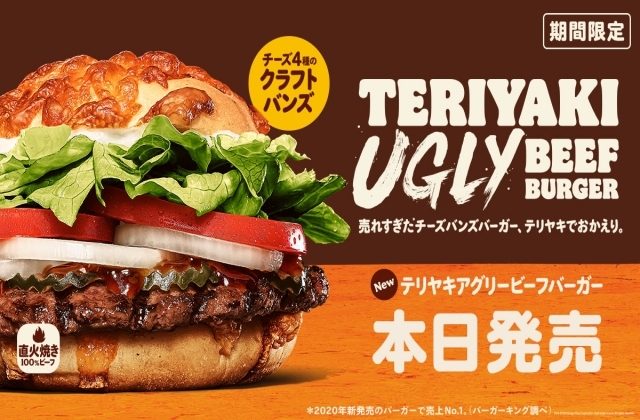 Burger King Japan is introducing a new burger flavor and it seems that it has skipped the good food presentation as it did not try to make it look appealing. The Japanese unit of the Miami-headquartered burger fast food chain launches the Terikyaki Ugly Beef Burger and it is sure to get attention.

Burger King Japan is known to add uniquely-named burgers and flavors but they proved to be a good idea as they have always been a hit. It recently offered spicy Whoopers that were said to be truly “hot” that it is enough to fend off evil. It was also called “magma meat walls” for the strong spiciness but the Japanese love them and it led to the birth of burger eat-all-you-can challenges.

Burger King Japan also created the Cheese Ugly Beef Burger and despite its unattractive name, it was one of the fast-food chain’s best-selling items in the past year. The burger was given this name because of the sloppy appearance as the four-cheese buns are served with the patty in its messy state.

This burger is so popular that Burger King decided to make a follow-up using and retaining the ugliness in the description. The burger joint created another messy burger with a taste that cannot be ignored.

HypeBeast reported that Burger King Japan is once again releasing another extraordinary burger menu and it will surely ignite curiosity among BK burger lovers. The restaurant decided to let go of the aesthetics and focus on the taste and the Teriyaki Ugly Beef Burger was born.

The fast-food company placed minimal effort in making the burger attractive but the appearance was compensated with the amazing taste. The Teriyaki Ugly Beef Burger is filled with favorite ingredients including a layer of mozzarella, cheddar, gouda and Egmont cheeses that were baked on the bun.

Inside, the burger patty was slathered with rich teriyaki sauce then pickles, roasted onions, red miso paste, lettuce and condiments are layered between the bun and patty. The taste is said to be sweet and tangy.