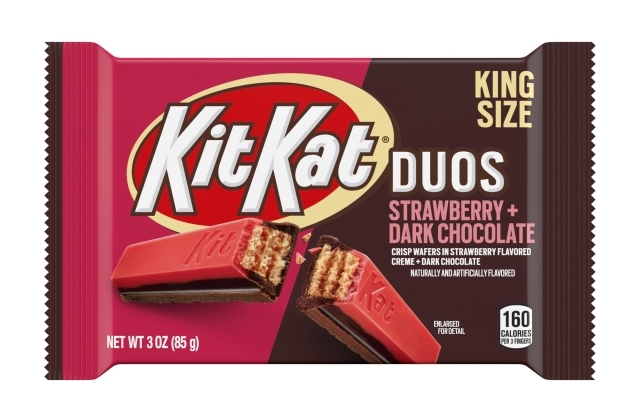 Hershey introduced the Duos Strawberry + Dark Chocolate and THiNS Chocolate Hazelnut on Jan. 12. The company said this would be a permanent addition to Kit Kat bars instead of a seasonal offering only.

Since Hershey tried to reinvent its Kit Kat chocolate line, it has already come up with a number of variations, and most of them are hits with customers. Flavors like green tea were also launched to cater to the taste of the consumers in certain regions like Japan, where the green tea flavor is popular.

Hershey's Kit Kat also has unique flavors such as Fruity Cereal, Pumpkin Pie, and Whisky Barrel Aged. These were mostly created in collaboration with the experts.

According to The Baking Business, the Kit Kat Duos Strawberry + Dark Chocolate features a combination of sweet strawberries and rich dark chocolate. The outcome is an awesome chocolate bar that should be tried. This will be sold in the usual Kit Kat bar size as well as the king size.

It was noted that this new combined flavor followed the chocolate bars that were released in 2019, which is the Kit Kat Duos Mint + Dark Chocolate and the Kit Kat Duos Mocha + Chocolate in 2020. This would be a perfect gift just in time for the upcoming Valentine's Day.

As for the Kit Kat Thins featuring the Chocolate Hazelnut flavor, this is a new addition to the Thins selections that originally debuted in early 2021. And just like what its name suggests, this is a slim chocolate wafer bar that is thinner than the usual Kit Kat.