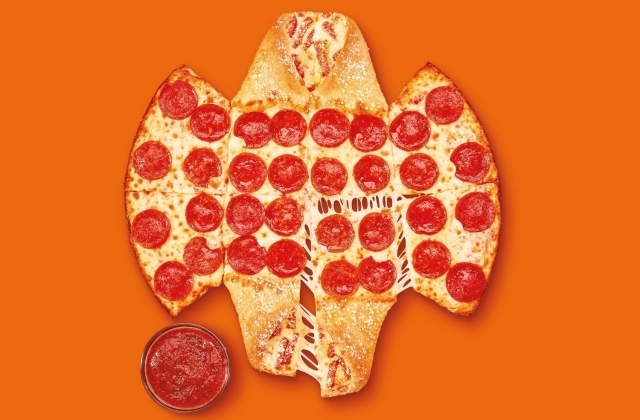 Little Ceasars announces the arrival of a new food item, and it is both a calzone and pizza. The pizza chain launches the "Batman Calzony," and it will be in the stores for a limited time only.

Little Caesars' new product is apparently inspired by Gotham City's superhero which is Batman. It has used the theme to make a new version of its Crazy Calzony and it looks irresistible.

The new item is also introduced just in time for the release of "The Batman" film that is coming to theaters on March 4 in North America. On the international stage, the movie is scheduled to be launched earlier and will be in cinemas starting March 2.

Little Caesars' The Batman Calzony is a food item that was made by mixing pizza and calzone which are two of the most favorite menu. It has been shaped into a bat, and the calzone crust is filled with cheese, pepperoni, white sauce, and special Little Ceasars pizza sauce.

It is then served with the restaurant's exclusive crazy sauce. Customers can get this new pizza for $7.99 and it will be available in the store outlets starting Jan. 24.

"Anyone can now bring superhero vibes to pizza night by trying the new 'The Batman Calzony,' Little Ceasars' chief marketing officer, Jeff Klein, said in a press release, "It is the most delicious part of our partnership with the upcoming film 'The Batman.'"

Customers can place their order for The Batman Calzony using the Little Caesars app and can be delivered to homes or pick-up at the designated station of participating branches. There is also an option to buy in the stores and pick up the item without pre-ordering and this service is available between 4 p.m. and 8 p.m.

It was mentioned that the price of The Batman Calzony may vary depending on the Little Ceasars location. The rates may be a bit higher in California, Hawaii, Alaska, and third-party online ordering sites. Delivery fees could also apply for orders less than $10.

Meanwhile, the Crazy Calzony was first launched in Little Caesars in August of last year. It was offered for a limited time but the customers' response to the new item was great.

As per Hypebeast, the original Calzony was cross-shaped and all four corners were stuffed with mozzarella cheese and garlic white sauce then topped with pepperoni. The pizza is completed with a sprinkle of parmesan cheese. The price of the Crazy Calzony at that time was $8.49.