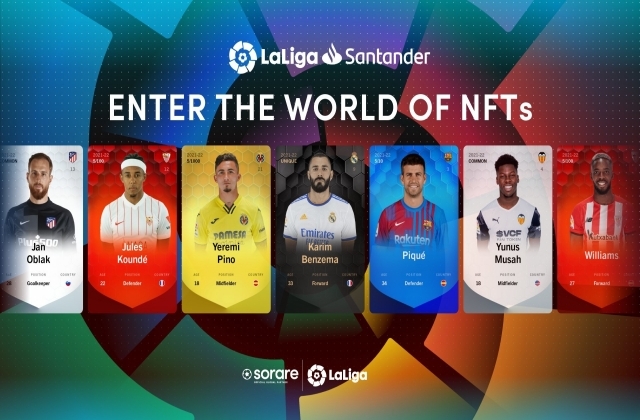 LaLiga, Spain’s premier soccer league, has officially entered the non-fungible tokens or NFT market after launching its football cards featuring the players. It was reported that the league created its NFT fantasy football cards after teaming up with Sorare, a French start-up.

LaLiga is the latest sports association to join the NFT and cryptocurrency bandwagon. As for football, it is the first of the top 5 world football leagues to contract a major NFT partnership deal, as per CNBC.

For the unversed, NFT is a type of digital asset that is designed to warrant ownership of certain virtual items that include art pieces, trading cards, photos, and more. These are created on a blockchain but unlike bitcoin or other cryptocurrencies, these cannot be exchanged.

On the other hand, Sorare is a fantasy football game where players buy, sell, trade, and manage virtual teams of five with digital player cards. It uses blockchain technology for the gameplay based on Ethereum.

Now, LaLiga teamed up with Sorare to create the players’ NFT football cards. The former signed a contract with the latter for an exclusive, long-term licensing partnership and release the league’s NFT cards featuring the top players such as Real Madrid’s Vinícius Júnior, Atlético Madrid’s Antoine Griezmann, and FC Barcelona’s Pedri.

"At LaLiga we are always looking for innovative ways to offer our fans new and exciting experiences and to broaden the appeal of our competition, the greatest in the world,” LaLiga president, Javier Tebas, said in a press release. “This partnership with Sorare, the most exciting sports NFT projects today, enables us to reach new audiences globally and gives existing fans additional ways they can get involved with the players and the clubs they love."

In any case, LaLiga follows other major sports federations such as the National Basketball League in its foray into the cryptocurrency market. NBA is already raking in millions for its collectibles developed for blockchain and sold as NFTs. The football league may also start gaining massive profits through this new crypto venture as it also has large fan bases worldwide plus digital assets are being considered valuable these days as well.