COVID-19 increases the chance of getting an autoimmune condition. Here's what the science says so far 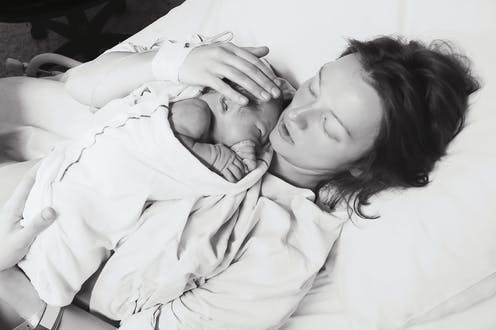 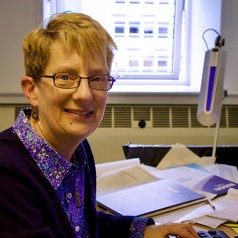 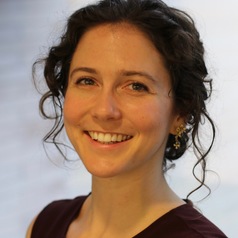 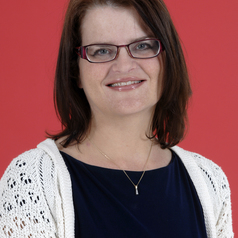 Over the past 15 months we have avoided hugs and handshakes, stayed at home and quarantined, and experienced important life events alone. We have been reduced to family bubbles – keeping away from friends, acquaintances and even other family members.

Who could forget the poignant images of the Queen sitting alone and masked at Prince Philip’s funeral in May? Many of us eagerly await the return to “normal”, yet the disruption provides an important moment to reflect on the role of companionship at critical points in our lives, such as grieving or giving birth.

The pandemic made pregnancy a particularly stressful time for expectant mothers, and giving birth alone became both a fear and a reality. Often a birthing partner was only admitted during the actual labour stage. Support from family members, friends and “doulas” – paid birthing companions who provide practical and emotional support – was strictly curtailed. For some women this made giving birth a deeply traumatic experience, undergoing a painful experience without the reassurance of any companions.

Yet this is not the first time in history that women have had to undergo this intense experience without support. In Defoe’s A Journal of the Plague Year, based on the Great Plague of 1665, the narrator laments that:

One of the most deplorable cases in all the present calamity was that of women with child, who, when they came to the hour of their sorrows, and their pains come upon them, could neither have help of one kind or another; neither midwife or neighbouring women to come near them.

Of course there is no suggestion that women were left without appropriate medical care during the COVID pandemic, but they were certainly left without the modern equivalent of the “neighbouring women”. Despite being frequently called “gossips” these women performed a function much like a modern-day doula.

They too provided emotional and practical support to a woman in labour. The relationship was reciprocal, and women would act as each other’s gossip in turn, as detailed in the novel The Gossips’ Choice. Women often gave birth in a room filled with women including a midwife or handwoman, neighbours and female relatives. 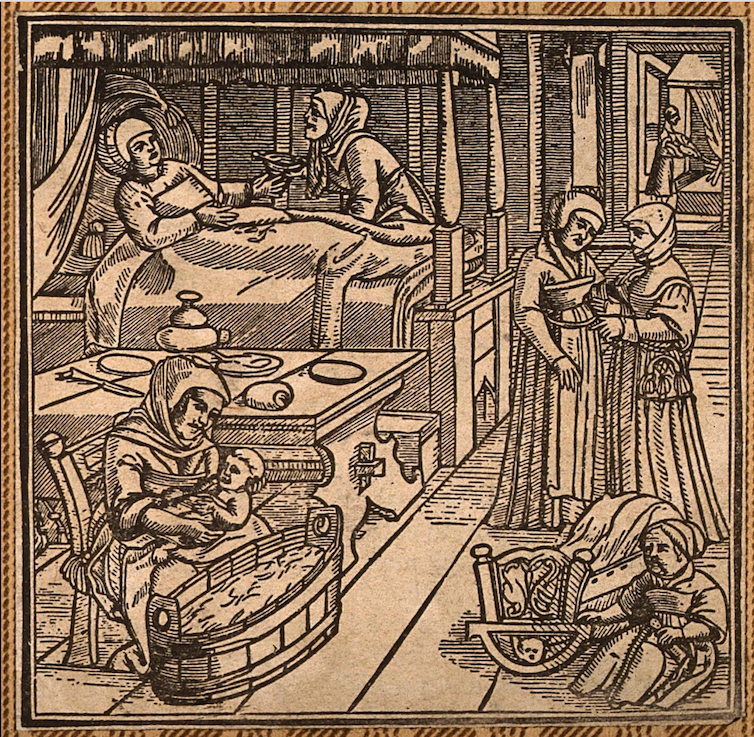 ‘Neighbouring women’ looking after a woman who has just given birth, from 1711. Wellcome Collection, CC BY

Companionship of peers, not just professionals, was considered comforting and essential during this challenging experience. Since the mid-20th century, birthing experiences have increasingly overemphasised professional relationships at the expense of this kind of social intimacy. While support networks during childbirth have changed over the years, the company of someone trusted throughout labour is a key component of respectful maternity care and provides reassurance to the mother.

During the 18th century it became more usual for men to be present in the birthing chamber as surgeons and physicians took more interest in obstetrics and worked as “accoucheurs” or male midwives, but the labouring woman would still have the companionship of her gossips.

From the mid-18th century, “lying-in” or maternity hospitals were founded in many western countries. But it remained the case that, during the 18th and 19th century, most working-class women would have been supported by neighbouring women both during labour and immediately afterwards.

As the location of childbirth shifted from the home to the hospital, these support networks were challenged and changed. By the 1960s, women giving birth in hospitals frequently found themselves left to labour alone for long hours in sterile hospital environments. Birth was becoming increasingly medicalised and the professional relationship took precedence over all others. 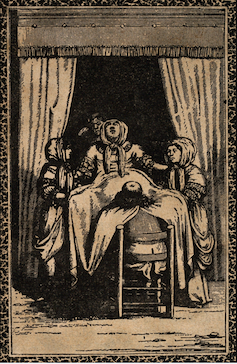 This was widely considered forward-thinking and modern. While midwives checked on the mothers, often there was no birthing partner, friend or neighbourhood women present, and increasingly an obstetrician managed both pregnancy and birth.

History reveals how birth companionship has changed over the centuries – and even before the pandemic took hold, things were changing again. For example, over the past two decades doulas have experienced a sharp rise in popularity due to cultural shifts towards prioritising women’s experiences during birth. These shifts stemmed from birth activism that began in the 1970s as part of the women’s movement and, after American midwifery was professionalised in the 1990s, doulas began to fill a gap in non-professional care.

From the 1970s, fathers were increasingly invited and even encouraged to participate in antenatal classes and to attend the birth. While medical advancements over the past few decades have been life-saving for more at-risk mothers and babies, something is now lacking both for those and the majority of unproblematic deliveries.

That “something” can be explained by the companionship that people have sought out in different times and places. COVID has challenged women’s assumptions about childbirth. Women’s experiences of labour have been ignored at a time when their fears about giving birth were heightened by the restrictions of the pandemic. Companionship could have provided calming comfort.

Those present during birth can make a big difference to mother and infant, from providing emotional support and advocating for the mother’s preferences during labour, to decreasing the chance of postpartum depression.

It seems a shame that just as things were turning back towards friendly support for labouring women, the pandemic put an end to it. A mother’s desire for companionship and support from someone they trust during birth is part of the reason people pay hundreds of pounds to be attended by a doula in a hospital. It also influenced others to consider “free birth” with no medical professionals the best option under pandemic conditions.

We need a broader definition of what comprises an acceptable birth experience, one that includes adequate social support. COVID-19 turned childbirth into a lonely and frightening experience for many women – but it could provide the starting point for an discussion about how we improve the experience of childbirth for all women.