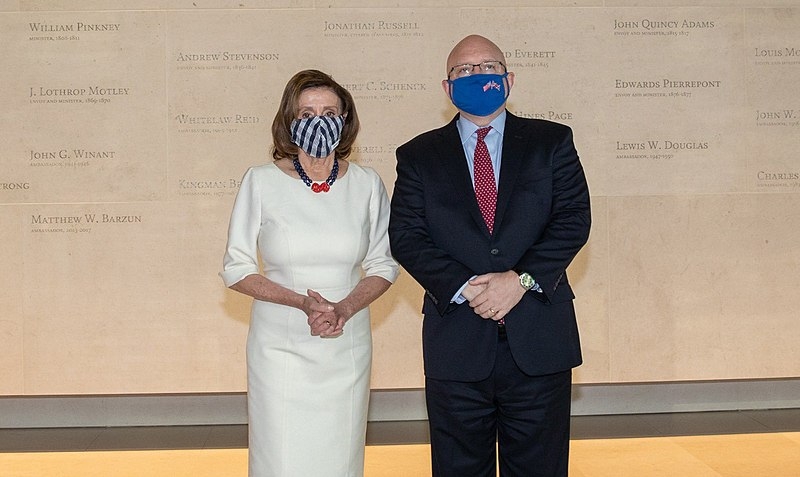 US House Speaker Nancy Pelosi was among her fellow presiding officers in the G7 in attendance at the summit in the United Kingdom. Following the summit, the group was shown around the set of the popular British tv series “Coronation Street.”

The visit comes as the speakers gather in Lancashire for a weekend summit. At the conference, they discussed security issues and the impact of social media.

Cast member Mollie Gallagher spoke about her character’s storyline on the show, based on an actual case of 20-year-old student Sophie Lancaster. Lancaster was fatally kicked while she was dressed as a Goth in Bacup, Lancashire, back in 2007. Sir Lindsay Hoyle said that shows such as “Coronation Street” have a big influence on people’s perspectives.

“What we’ve got to show is that we’re not all the same, we should be different, we should be able to accept other people’s looks and views,” said Sir Lindsay. “Hopefully we’ll have a better country when we continue to call out hate.”

The G7 group of speakers also visited the show’s memorial bench in honor of the 22 victims of the Manchester Arena terror attack back in 2007.

Meanwhile, Axios reports that Pelosi may need some Republican votes to successfully pass the bipartisan infrastructure package through the House in order to make good on her commitment to the centrist Democrats. The House is left with passing the infrastructure bill as the Senate passed the proposal several weeks back.

The passage of the bill hit a minor roadblock when centrist Democrats demanded that the infrastructure bill be immediately voted upon before they take a vote on the $3.5 trillion budget resolution.

Around 20 progressive Democratic lawmakers are threatening to withhold their votes on the $1.2 trillion infrastructure proposal. Centrists in the party are looking to have at least 10 Republicans in support of the bill.